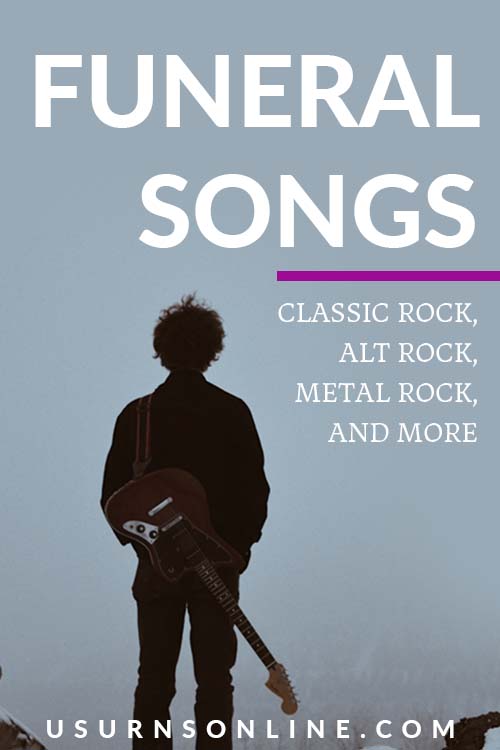 If your loved one was a classic rock enthusiast, choosing the best rock songs for their funeral will take something of a deft touch.

Other styles of music are easy. Some people love the classical beauty of Bach and Mozart, while others are going to turn to religious songs and hymns. Still others will prefer to hear one of their loved one’s favorite pop and country standards.

Among all these styles, there are plenty of songs that are perfectly suited for the funeral or memorial service.

But for the rock ‘n roll fan? You want to select songs that represent them well, but at the same time you don’t necessarily want the music choices to come off as tactless or as a joke.

That’s why we’ve curated the 23 best rock songs for funerals. Each track has lyrics suitable to remember and memorialize your loved one, and many are rock ballads that feel right for a celebration of life.

And, most importantly, they all rock.

When you choose one of these classic rock songs for your loved one’s funeral, you know that somewhere your special someone is rocking out and watching with approval.

Leave no doubt how much they’re missed with this classic song by the beloved band Pink Floyd. They’ve left us behind, and we will never forget the impact they made on our lives. It’s much like how Pink Floyd influenced so many later musicians and bands.

Melancholy and yet inspirational, this song won’t leave a dry in the house. It’s a good thing tears bring healing!

Everyone knows this beloved song from Queen, but to play it at the funeral of a sudden loss makes it all the more impactful.

When your loved one lost their battle on earth all too soon, the lyrics to this one will really heal our souls with fond memories and laughter-through-tears. Flyin’ too close to the sun…

Written six years after the death of Queen’s original lead singer Freddie Mercury, and dedicated to his memory along with all others who have gone too soon, this classic rock song is ideal for a celebration of life.

Is it the best rock song ever? Well, it just might be, and for good reason. “A new day will dawn for those who last long.”

This beloved rock and roll tune is wonderful played live by a talented band if you have one, but blasting the original won’t have anyone unhappy either!

We bet your loved one listened to Led Zeppelin time and time again – it was likely the soundtrack to their life. That makes this the perfect song by which to remember them!

If you didn’t answer “yes” to Stairway to Heaven being the greatest rock song of all time, it’s likely because you were holding out for this classic.

Free Bird by Lynyrd Skynyrd is known to all and will be a beloved addition to the funeral for your special rocker.

This haunting melody and lyrics by the rock gods (Queen, obviously) will be just right for your funeral playlist.

With a mournful tune and the melodious crooning of frontman Freddy Mercury, people will want to hum along as they remember and discuss how much they loved their special someone they lost all too soon. Best of the best when it comes to “power ballads.”

This selection by GnR won’t be out of place when planning your rock funeral songs! The melody is so catchy, and the lyrics will be on everyone’s lips.

Just the right amount of hard rocking and wistful lyrics sung by Axl Rose will make this funeral enter into more of a celebration of life, and isn’t that what they would have wanted?

This seriously mournful and hard-hitting rock song by Metallica won’t leave a dry eye in the house. The lyrics are just heartbreaking, making this track suitable for a sudden loss after a long battle with illness or addiction. It’s like a punch in the gut, except it’s right in the heart!

Who knew that a band named Slaughter could write and sing such a mournful and haunting tune? This classic power ballad was written by Mark Slaughter after attending the funeral of his girlfriend, who died suddenly – making this an ideal choice if you are facing something similar in your life.

Motley Crue finds their softer side with this classic rock song, that will be a reminder that this earthly home isn’t forever. Yes, it’s hard-hitting, but it’s also soul-searching. So even hard rock not-lovers will appreciate this choice.

When you or your loved one has been searching and yearning for heaven, Home Sweet Home will hit all the right notes.

A bit lesser known than some of the others we’ve mentioned, this song by Thousand Below still has a cult following and we think we know why!

The lyrics are so beautiful, and sung so well you will find yourself hanging onto every word. We think the funeral goers will agree, so consider adding this jewel into your playlist.

With heartrendingly poetic lyrics, this song by beloved band Rush is a no-brainer for adding to your funeral preparations.

Inspired by the steampunk world, drummer and lyricist Neil Peart penned some truly artful and beautiful words, which were made even more tragic when he passed from brain cancer.

When it comes to songs everyone knows and loves, Candle in the Wind is right up there at the top of the list! It is so heartfelt and lovely, with Elton’s crooning voice telling us how much he loved and lost.

Whether you choose the 1973 version which speaks of Marilyn Monroe, or the 1997 version, which immortalized Princess Di’s untimely death, you can’t go wrong by adding this soft classic to your funeral playlist.

Sting is known for his poetic words that are rich with deep meanings, and Fields of Gold is no exception to the rule!

The simple tune compliments the lyrics, making it a great choice for playing during the slide show presentation or when the guests are signing the guest book at the door.

Mournful and nearly gut-wrenching in its honesty and story, Eric Clapton wrote this classic song after the death of his beloved four-year old son, Conor, who accidentally fell out of a 53rd story window.

When you need a song to speak for the pain in your heart after losing someone, Tears in Heaven is the perfect choice.

A wonderful choice for the loss of a spouse or significant other, I Am Sailing was originally recorded by the Sutherland Brothers. Whether you go with the original or Rod Stewart’s classic cover, you’ll have an honest, simple, and touching tribute.

A sad and lonely song by Neil Diamond, I Am … I Said represents his own feelings of inadequacy and depression. Even the brightest lights in this world can feel extinguished or dimmed by the difficulties of life, making this soft rock classic a good choice for a funeral song.

Written as an actual lullaby for his then-baby daughter, and not a song about death, Lullabye (Goodnight, My Angel) is still a great choice for a funeral or celebration of life. It’s not too sad, but instead hopeful and soft and oh-so-pretty.

This is the ideal track for a simple memorial or to play during your online slideshow on social media.

For a “particular diamond who was extra special,” this beautiful song by Coldplay literally hits all the right notes. The lyrics would be especially fitting for the loss of a childhood friend or sibling, but really anyone will approve of this song and find themselves singing along.

“We’re all of us stars … just fading away.” This gentle song is still hard-hitting in the lyric department.

Written for the ending of the film The Butterfly Effect, here Oasis reminds us we are all here for only a brief time so we should live life to the fullest.

A metaphor for fate and the heaviness we all carry on our shoulders, this song by Modest Mouse is deep and full of meaning and promise. We are all here for only a moment – let’s make the best of our lives and leave behind a legacy.

Written from the perspective of the one who is leaving this life, Fiction by Avenged Sevenfold is a great choice if you are planning a songlist for your funeral. Sad and grieving, but still hopeful and full of auspicious meaning, this is a great choice.

Saying goodbye isn’t always a tragedy or a terrible thing – sometimes it’s necessary and healing. At least when it’s the right time! This lovely song by Cage the Elephant tells us life is a fight to the end, but it’s worth the journey.

Full of searing regret but still the promise of beauty and rebirth, What I’ve Done is a haunting song that will really bring the feelings to the surface of all of your guests.

Perfect for a memorial or funeral, or even just to listen to when feeling melancholy over the loss of your loved one.