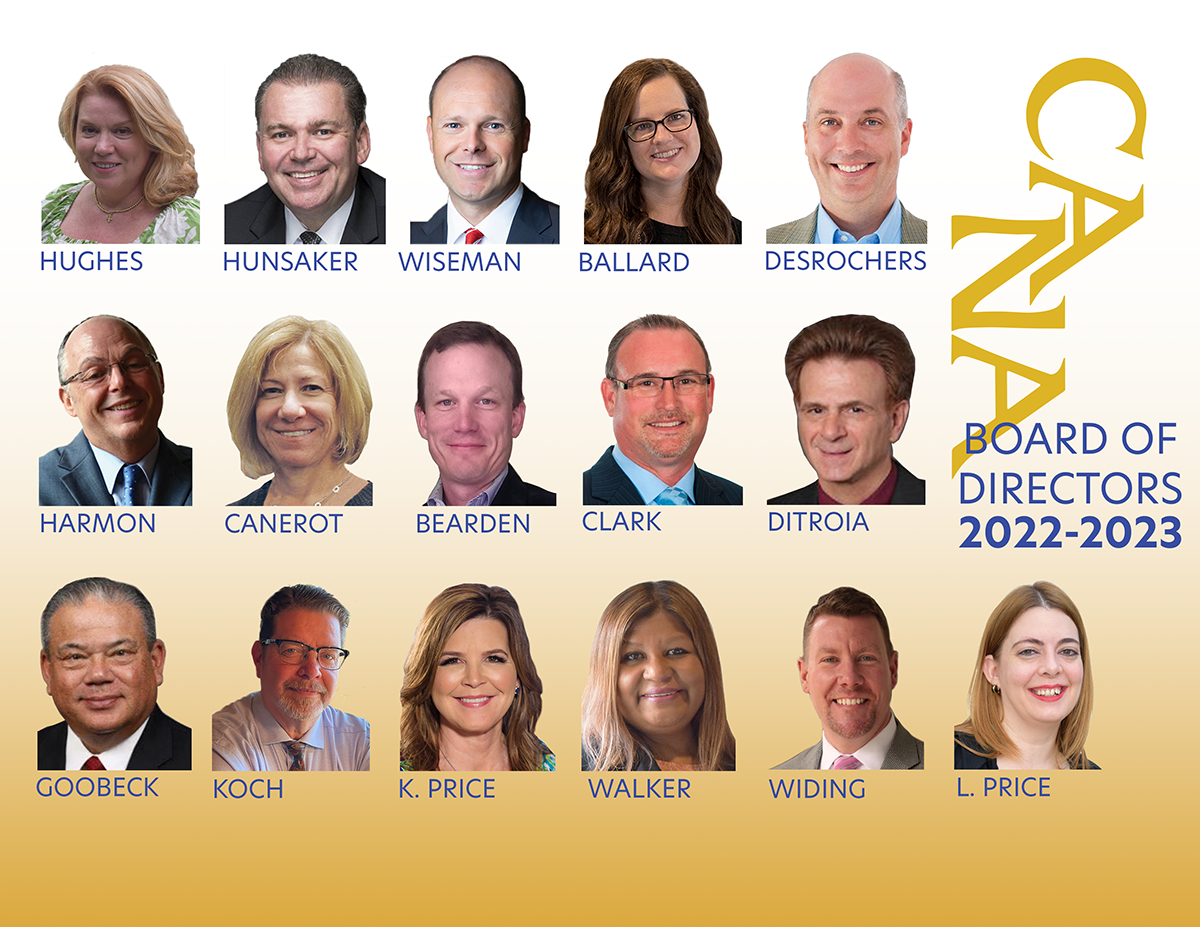 WHEELING, IL— The Cremation Association of North America (CANA) welcomed new board members and recognized the service of others at the Annual Meeting of the Membership in August 2022. CANA’s membership re-elected one incumbent board member and two new directors as well as passing the gavel to new CANA President Caressa Hughes.

Caressa Hughes is Assistant Vice President of Government and Industry Relations for Service Corporation International. In her role, she is well informed of emerging trends and regulations for our profession in every state and province. CANA’s Board of Directors had originally asked her to serve her presidential term starting August 2023, but when President-Elect Shannon Asmus asked to delay his service due to his own professional transition, Hughes confidently stepped forward. She will be the sixth woman to lead CANA’s Board, will continue as chair of the Government and Legal Affairs Advisory Group, and is honored to serve the role of President for the 2022-2023 year.

ELECTED TO THE CANA BOARD

CANA’s membership elected two new members to the Board of Directors to represent their interests and lead the association into the future.

Tim Koch, Owner of Metro First Call in Savage, Minnesota, has worked in the industry for 40 years, including 20 years on the funeral board in his state. “As a member of CANA, I believe that everyone should give back to their association,” he remarked. “I am interested in helping promote CANA’s goals as well as taking on the challenges that face the cremation industry.”

Jason Widing, Vice President of Business Development for Foundation Partners Group, has been in the funeral profession for 18 years. Widing looks forward to being intentional in CANA’s outreach to fellow associations and schools, to ensure CANA is “leading the cremation narrative to expand cremation understanding for the next-generation funeral professional.”

Denis Desrochers of Grégoire Desrochers in Victoriaville, Quebec was re-elected to serve a second term on the board and chosen to serve as Third Vice President of the association. Ryan Wiseman of Porter Funeral Homes in Kansas City, Kansas and Lindsey Ballard of Ballard Sunder Funeral Home in Jordan, Minnesota were nominated by the board of directors to serve on the Executive Committee as First and Second Vice President respectively.

CANA’s Board of Directors is complete with:

The Membership recognized Past President W. Scott Smith of All Texas Cremation for his service during a tumultuous time in the history of our profession and our world. As chairperson for the Texas Funeral Directors Association Texas Disaster Response Team, Smith and his team supported funeral homes, crematories, and cemeteries in regions who were all overwhelmed and past capacity while leading CANA’s Board of Directors. We are grateful for his service to our profession.

The annual In Memoriam service honored the deaths of several members of the funeral profession, including CANA’s Second Vice President Donald R. Fritz, who died unexpectedly in June 2022. Fritz was Director of Operations of the Cremation Society of Illinois and contributed his expertise to CANA’s Board of Directors and as chair of the Education Advisory Group. He is missed by his colleagues and friends throughout the profession, but particularly by his fellows at CANA.

CANA thanks its volunteer Board of Directors and all those who serve on its Advisory Groups for their commitment to the profession and the association. These leaders lend their guidance and expertise to keep the association a trusted authority for members and the profession. Find more information and learn how to get involved on CANA’s website: goCANA.org/BoardofDirectors

Founded in 1913, the Cremation Association of North America (CANA) is an international organization of over 3,500 members, composed of funeral homes, cemeteries, crematories, industry suppliers, and consultants. CANA members believe that cremation is preparation for memorialization.

Meet the Morticians | The Order of the Good Death