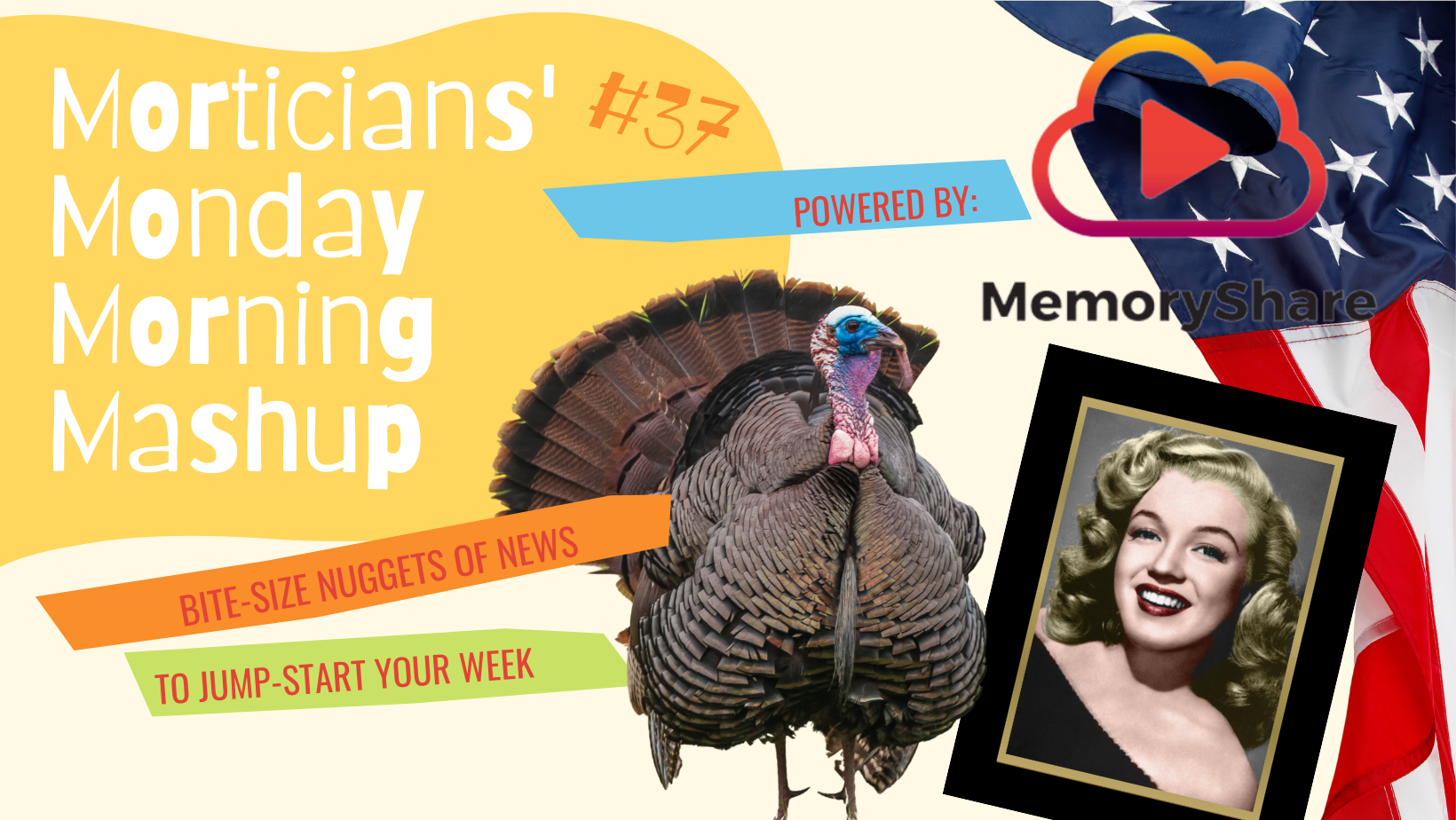 Welcome to the thirty-seventh edition of Morticians’ Monday Morning Mashup (on tuesday), 4M #37, where we’ll serve up bite-sized, easily-digestible nuggets of the deathcare news you need to crush conversations in the week ahead. Bon appetit!

Thank you, Deathcare Professionals, for all you do to honor those who made the ultimate sacrifice.

You make a difference.

We’ve shared plenty of stories about wild animals like hogs, dogs, and coyotes roaming free in cemeteries. Although a few have made the news due to their menacing or destructive behavior, most mind their own business; some even attract visitors with their presence. The refreshingly respectful wild turkey pictured above at Arlington National Cemetery certainly fits into the latter category. Last week she (yes, someone checked) joined a funeral procession, falling right in formation behind the solemn soldiers. According to Arlington’s Instagram page, she’s been spotted “paying respects at the Tomb of the Unknown Soldier and generally lounging in the sun throughout the cemetery.”

The funeral museum wants your artifacts

Did you know that many of the items displayed in Houston’s National Museum of Funeral History were donated by funeral directors? The museum frequently accepts donations of historically significant items. If you have a piece or a collection that might enhance the museum’s collection, consider reaching out for more information. The world needs to know more about why and how you and the generations of deathcare professionals preceding you do what you do!

TMI from a celebrity undertaker?

Is there such a thing as embalmer-deceased confidentiality? Perhaps there should be. A Hollywood mortician has written a “tell-all” book about the states of his late celebrity subjects, including Natalie Wood and — most descriptively — Marilyn Monroe. We won’t go into all the particulars here (there’s a gruesome narrative on the National Enquirer site if you want to learn more). However, it does raise the question of just how much information — if any — is ethical to disclose to the general public for personal gain and whether there’s an unofficial statute of limitations on disclosing these details. What say you?

The elected coroner of Ouachita County, Arkansas has been stripped of his embalmer’s license, funeral director’s license, and funeral home establishment license following a unanimous vote by the State Board of Embalmers, Funeral Directors, Cemeteries and Funeral Services. Sylvester Smith, Jr. of Williams Funeral Home of Camden was not present at the hearing, but told a news outlet, “I’ve had my license for over 40 years. I’ve never had an infraction complaint against my license by the board.”

According to a report by the Camden News, an inspector for the Board found infractions during a visit in September 2020 — infractions that had not been resolved by the time of his follow-up visit on November 22, 2021. During testimony this month, the inspector described the business as “filthy on the inside and outside,” noting “it appeared as though the funeral home had been unkempt and in disarray for quite some time.”

As the photograph of the preparation room above indicates, cluttered areas were a problem cited in the report at various sites as presenting tripping hazards and blocking exits. In the report, the investigator stated he did not observe any commercial biohazard waste disposal systems in the prep room.

“I observed a funeral home that we would consider substandard,” the investigator told the board during his testimony.

“Really, dealing with the age of the facility, they want us to modernize or whatever, it does not have anything to do with any kind of missing funds or anything,” said Sylvester Smith Jr. “This has something to do with some of the things in the facility needing to be upgraded. We are planning on moving to another facility in the near future.”

Smith’s son, Sylvester Smith, III, is an attorney and is representing his father and the funeral home in the case.

Rapper T-Pain has amassed quite a collection of customized cars, but one in particular stands out simultaneously as both “most awesome” and “world’s ugliest” according to one motor mag. It’s his “murdered out” bright orange and baby blue 1991 Cadillac hearse, which sports 28-inch rims and a 5.0 liter V8 engine. T-Pain nicknamed the car “Danielle Marino” after former Miami Dolphin Dan Marino, but because of the hearse’s previous use, it also earned the less-desirable moniker “Dolphin Killer.” The rapper explained that when he purchased the hearse he had to “Febreze the hell out of it” to get rid of a stench from “frequently” being “exposed to odors associated with embalming fluid.” Now, we’re not sure what your funeral coaches smell like, but if a similar “distinct smell” has “permeated the car’s interior” as it had T-Pain’s maybe Febrezing the hell out of it will work for you, too.

In last week’s 4M #36 we shared a list of terrible, tragic, and downright odd things some cemeterians have been dealing with recently. This week we can add to the list an unidentified decomposing body and a shooting death. On May 21 someone discovered a “partially decomposed” body in a New London, Connecticut cemetery; as far as authorities know, it wasn’t one that belonged there. The next day, a man was shot to death in a Bloomington, California memorial park. Since 24/7 armed guards aren’t an option for most cemeteries, what should be done to keep them from becoming crime scenes?

What Are Cremains? (& What to Do with Them) » Urns

What Are Cremains? (& What to Do with Them) » Urns