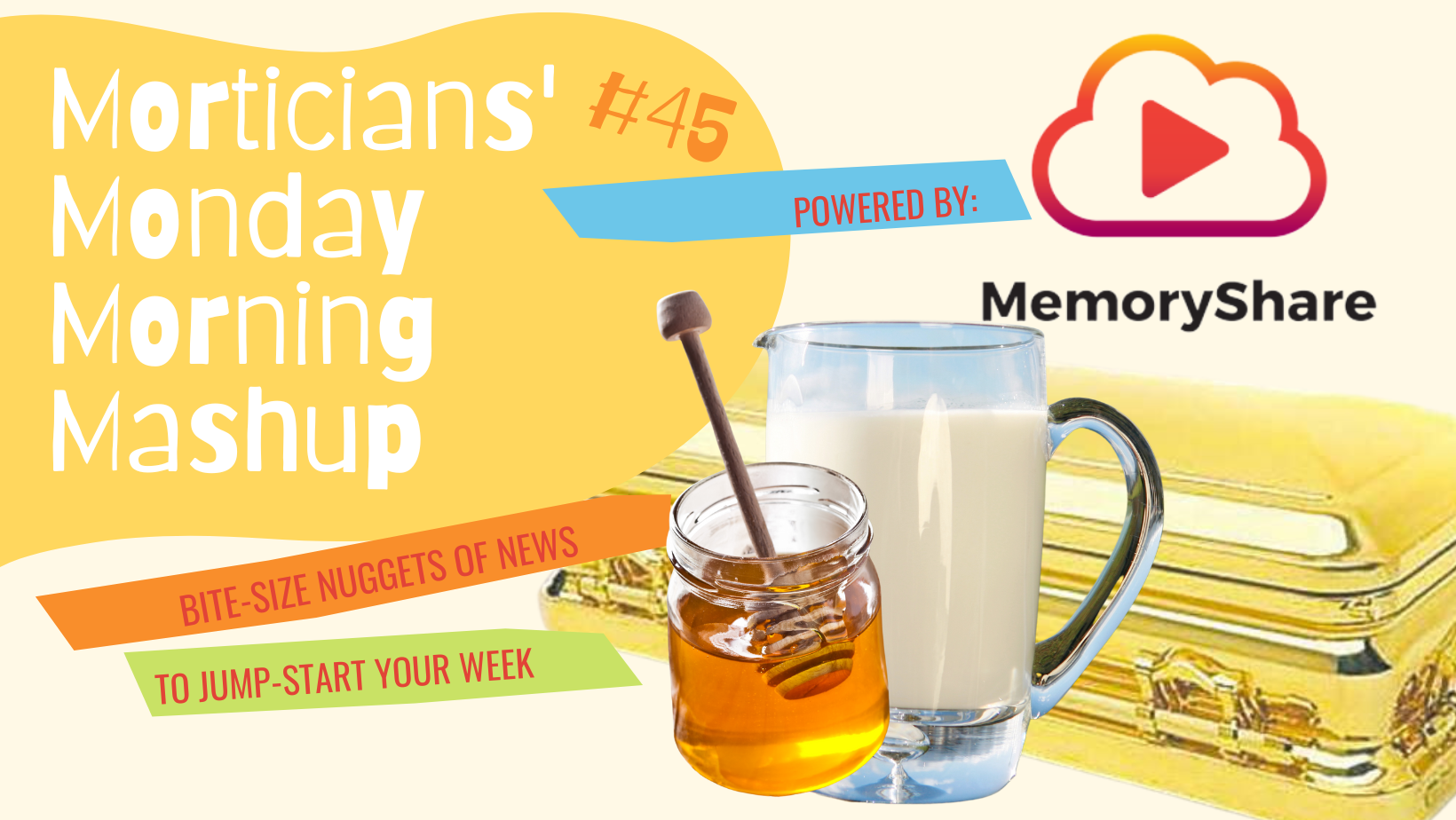 Welcome to the forty-fifth edition of Morticians’ Monday Morning Mashup, 4M #45, where we’ll serve up bite-sized, easily-digestible nuggets of the deathcare news you need to crush conversations in the week ahead. Bon appetit!

Coffin’ up money for a grave decision

Have you ever stopped to think about the practicality of perpetual cemetery care? In many countries, a cemetery plot is only a temporary resting place. After about 50 years or so, bones are dug up to make room for the next resident. In America, though, we commit to never-ending peace and maintenance, a concept which this video from NPR calls “a wacky, wild promise that we maybe should not be making.” Check out the video here:

Can Your Cemetery Really Bury You Forever? | Planet Money | NPR

Are witness cremations a thing of the past?

A Colorado crematory owner is being sued by a brother and sister who allege the facility “not only” did not do a witness cremation when their mother passed away in April, but is also “refusing to give back their mother’s body.” The siblings’ complaint questions whether their mother’s remains have been cremated or are still being refrigerated, and says the owner has not responded to their requests for “photographic evidence” of the body’s status.

When interviewed by a local news outlet, the owners called the allegations “preposterous” and that state regulators have investigated the “false allegations.” He also allegedly insinuated that the family would have trouble finding another firm that would provide a witness cremation because “nobody does witness cremation anymore.”

The worst way to die

We love Caitlin Doughty and her informative death-positive videos for their education value as well as her ability to demystify deathcare for the general public. One of Caitlin’s older installments on her “Ask a Mortician” YouTube channel has recently been picked up by the UK’s Daily Record. It describes the worst way to die, and it’s definitely not for the faint of heart — and probably (hopefully) nothing you’ll ever see in your lifetime as a deathcare professional.

It’s called scaphism, and it’s a method of punishment exercised around 500 BC for only the worst criminals. In the full 2015 video below, Caitlin describes the long, slow, and tortuous process that involves milk, honey, a hollowed-out log, and insects. Lots of insects.

In the deathcare world, the purchase of a Batesville Promethean would be an extravagant casket choice. At around $24k, most people would agree. However, the casket provided for last week’s services of socialite Ivana Trump easily outdid the cost of the Promethean — five times over, in fact. According to the Daily Mail, Trump’s “ornate gilded coffin,” provided by Frank E. Campbell Funeral Home in New York, made up $125,000 of the family’s estimated $152,000 funeral bill. The UK publication shared a stock image of the casket, which appears to be the 32 oz. Hallmark Bronze from Verplank. The actual brand or model of Trump’s casket hasn’t been publicly released in the press, although the 32 oz. version of the Hallmark Bronze usually retails for anywhere from $9,000 to $35,000 — not $125,000.

A routine lecture to high school students touring his funeral home has led one funeral director to TikTok fame. According to Entrepreneur magazine, Kentucky director and owner Nathan Morris now has 320,000 followers on TikTok, and it all started when his social media manager filmed and posted an excerpt of a lecture Morris provided to a touring high school class on the “biological inevitabilities of death.” The video went viral, and Morris reports that unlocking the “mysterious and essential” workings of deathcare has led to a powerful social impact. In fact, Morris says, a nursing student switched over to mortuary school after viewing his video.

In 1990, a member of the Santa Barbara County (California) Agricultural Commissioner’s office inspecting a seed shed on Santa Cruz Island came upon a tightly-sealed copper box containing human cremains. In addition to the remains, the box contained what turned out to be a garment snap from the 1920s or 30s, a platinum wedding band with glazed-over diamonds, and polymer-blend false teeth manufactured between 1950 and 1980.

A forensic anthropologist examined the cremains and determined they were of a woman of advanced age who was cremated in the 1950s or 1960s. The office event submitted the case to the TV show Unsolved Mysteries in 1992 in the hopes viewers could provide leads to the woman’s identity, with no luck. Even psychics who watched the episode, entitled “Jane Doe’s Ashes,” couldn’t help. The cremains were eventually buried in an unmarked grave on the island.