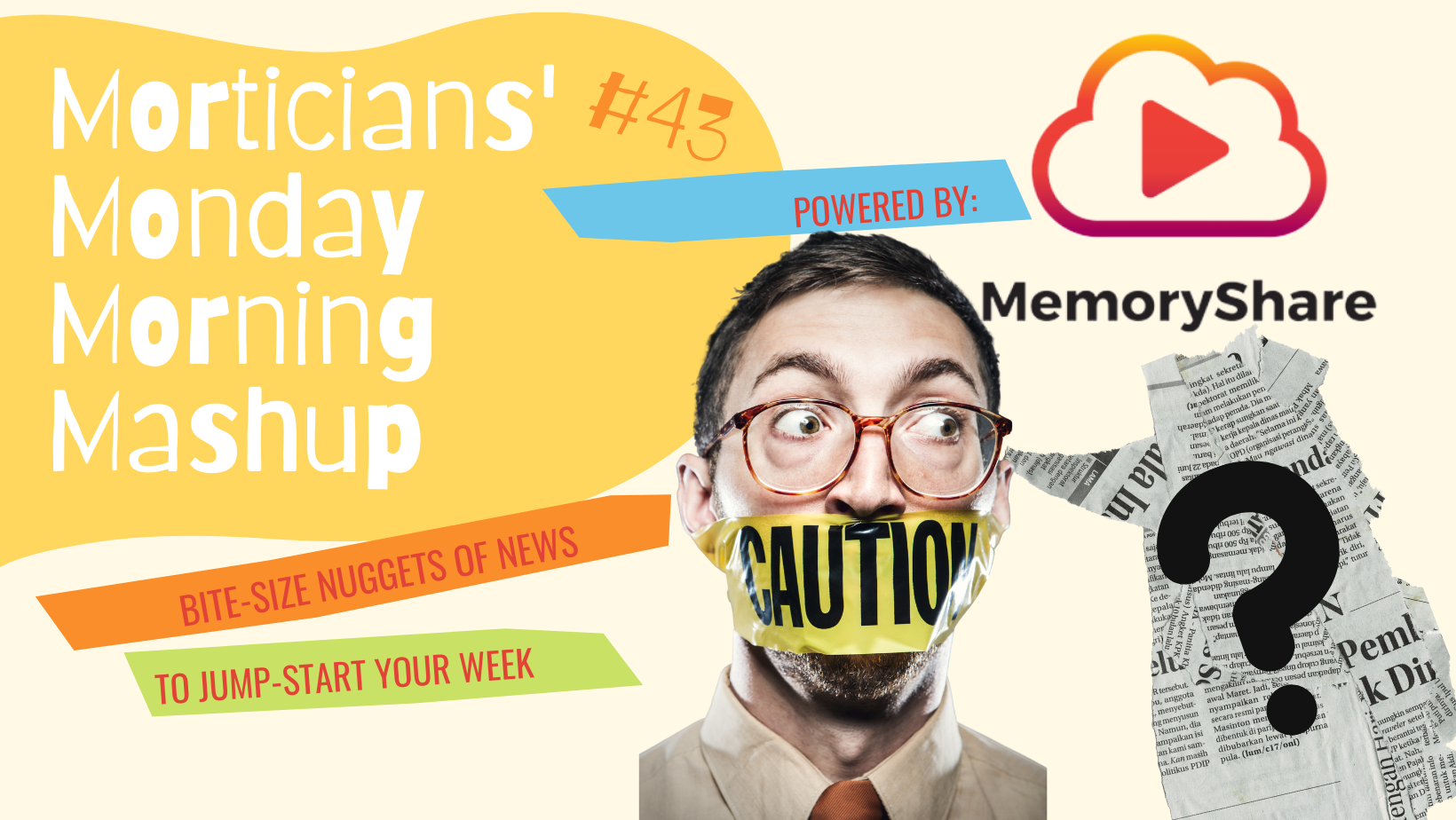 Welcome to the forty-third edition of Morticians’ Monday Morning Mashup, 4M #43, where we’ll serve up bite-sized, easily-digestible nuggets of the deathcare news you need to crush conversations in the week ahead. Bon appetit!

Brutally honest obits: Should they be published?

Larry Pfaff, Jr. paid $500 to the Florida Times-Union newspaper to publish the obituary (below) that he wrote for his father — an obit that has been called everything from “scathing” and “harsh” to  “healing” and “cathartic.” Granted, the less-than-complimentary obit was certainly unusual (which is why it’s getting so much press), but to the Pfaff family it was a “brutally honest” account of a man they truly won’t miss. But here’s the big question for deathcare folks: Should an obituary be considered an ad or an editorial by the newspaper, and does anyone have the right to edit an obit prepared by the family?

After the obit caught the attention of other news outlets, the Times-Union issued an apology for publishing an “obituary that did not adhere to our guidelines.” Pfaff, Jr. says he never saw any guidelines for publishing obituaries, and the only relevant statement on the newspaper’s website says they have the right to “edit, refuse, or reject any content before final approval.” However, this paper’s obits aren’t even reviewed by the newspaper’s editorial staff, but are handled through their advertising arm — a process typical of most obituary submissions these days. What do you think? Have you ever edited — or asked a family to edit — an obit before submitting it to the newspaper? Should the paper have the right to refuse to publish an obituary?

Corniest headline of the week:

“You Could Make a Killing With Deathcare Stocks in a Recession.”

When an identification mistake in deathcare is made it’s usually simple to track down the point where the error was made — and by whom. In the recent case of the mixed-up remains of two men named “Gonzalez” who died in Texas in 2020, though, it wasn’t just one actor or error that culminated in a mistaken cremation; it was everyone involved in the entire chain of custody. A lawsuit filed by the family of Jose Gonzalez alleges that multiple agencies were to blame for switching their loved one’s body with that of Jesse Gonzalez, who was supposed to be cremated. It wasn’t until the family of Jose Gonzalez opened the casket at a funeral home in California and found the wrong body that they began to unravel the chain of mistakes that led to Jose’s wrongful cremation back in Texas. The suit names the California funeral home, the Texas medical examiner’s office, the health center that harvested Jose’s organs, and a mortuary service that performed the cremation — none of which caught the grievous error.

On Friday, July 1, authorities found 31 decomposing bodies and 16 sets of cremains in Lankford Funeral Home & Family Center of Jeffersonville, Indiana. Few details have been released, other than the fact that some of the remains had been at the funeral home since March and that the investigation is still ongoing, so no charges have been filed. However, two families have already filed suit in the hopes of financial compensation and a jury trial. According to the families, funeral director Randy Lankford “gave them misleading information” about the status of their loved ones’ remains, telling one family the company “didn’t have a container” in which to send them.

Extra time for a cemetery crime?

It’s bad enough that a woman had to witness a man exposing himself to her in public, but the fact that he did so in a cemetery while she was visiting the gravesite of a friend makes it even more heinous. That’s what happened on July 2 in Hernando County, Florida. The woman filed a complaint with the sheriff’s office, and the man was arrested — but not before exposing himself to a woman at the post office the next day. He’s charged with two counts of indecent exposure and remains in the detention center on $10,000 bond, but you have to wonder if there should be additional implications when something like this happens in a cemetery!

It’s a case of dueling lawsuits that started with an $8 million estate, now includes a $10 million defamation claim, and unfortunately involves a deathcare work and an Aiken, South Carolina funeral home. Here’s the rundown, in chronological order:

Questioning the North Korean government is a terrible idea

When the North Korean province of Yanggang experienced a new COVID-19 outbreak in May, the government instituted a policy of “unconditional” cremation under its emergency quarantine law. In most cases, the authorities are not including a cause of death on documentation, leaving many families wondering why their loved one died. Recently one family continually questioned the Ministry of Social Security about a loved one’s cause of death, specifically asking them to confirm the person died of COVID; if COVID wasn’t the cause of death, they wanted to conduct a funeral. Instead of the body or an answer, though, the family received 10 days in jail for “expressing opposition to state policy.” They were freed after a “warning that they would pay a high price for resisting again.”

The Man Who Took Down a $3 Billion Funeral Empire