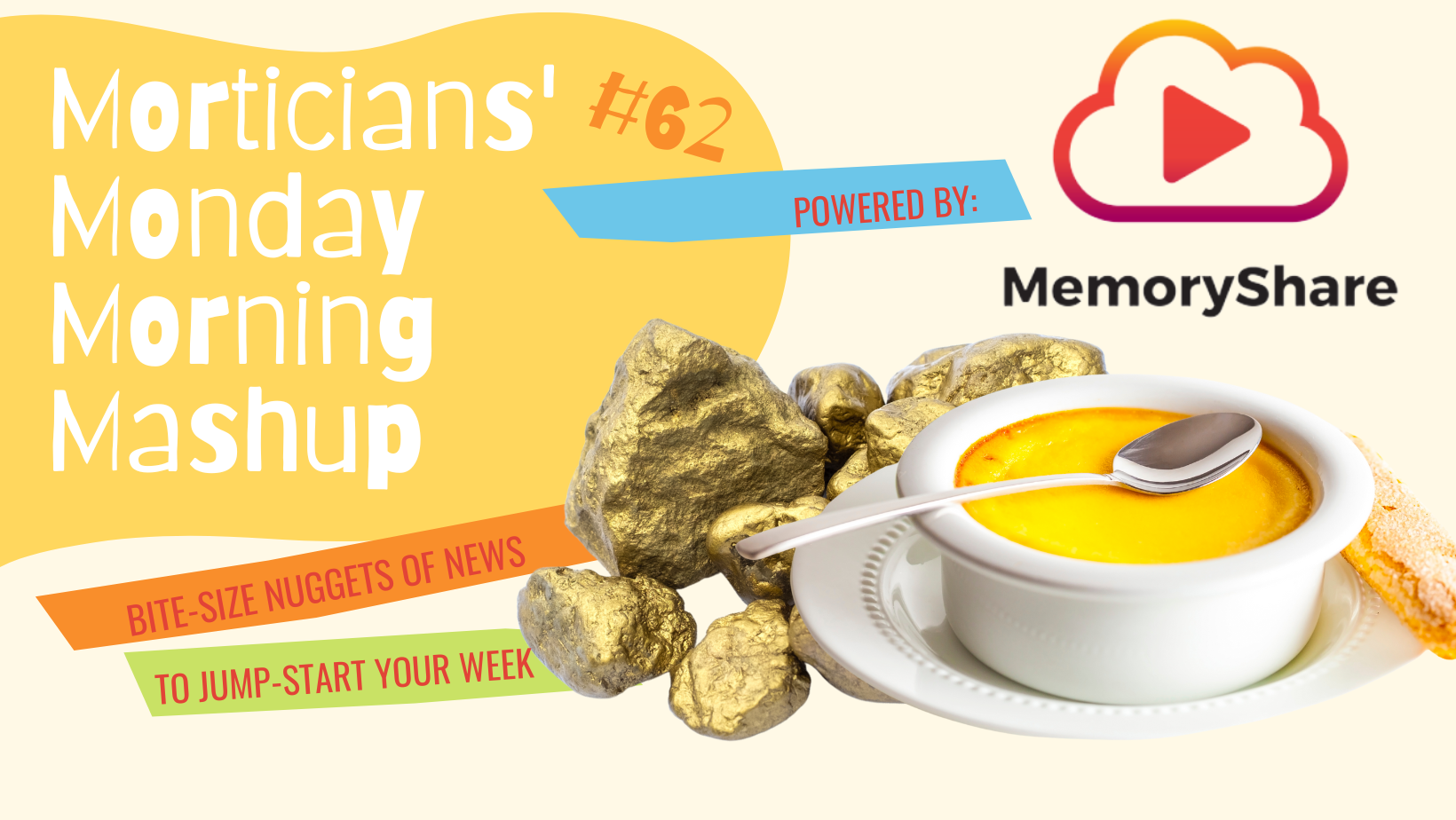 Welcome to the sixty-second edition of Morticians’ Monday Morning Mashup, 4M #62, where we’ll serve up bite-sized, easily-digestible nuggets of the deathcare news you need to crush conversations in the week ahead. Bon appetit!

Sometimes the only way to get an important message across is through shock and awe; this is particularly true when it comes to gun violence. An artist currently showing in a Washington, DC art gallery is doing his part with an interesting medium — wound filler — in his sculptures. Robert Buck used a 12-gauge shotgun to blow holes into seven cylinders made of wound filler to demonstrate the destruction bullets cause to a body. The show is appropriately named “Wound Filler” and runs through November 26 at the Von Ammon Co. gallery.

Valid warnings from a mom/mortician

More and more deathcare folks are using TikTok to share all sorts of interesting things (#DeathTok), but Florida mortician Lauren Eliza’s viral message is especially significant. Last week she garnered more than 4.5 million views in her video where she lists the toys she’s banned from her household — based on her experience dealing with the tragic accidental deaths of children. Among her list are: teething necklaces, balloons, skipping ropes, toys with button batteries, anything made with dangly string (like yoyos), and water beads, which are dehydrated beads that expand to the size of a marble when submerged in water. Kudos to you, Lauren!

Seven robbers armed with machetes, rocks, bolt cutters, and a gun broke into a Zimbabwe funeral home last week. After forcing the security guard to open the office safe and finding nothing of value, the thieves settled for what they could find, making off with “oil, a gas cylinder, sneakers, embalming liquid, and custard” in addition to the guard’s mobile phone and $30. Don’t you know the guy who was saving that custard for dessert the next day is super annoyed. That’s what happens when you don’t label the food you put in the office fridge … And you have to wonder who those shoes belonged to.

It’s hard to imagine a city of nearly 1.5 million having only one crematorium, but that’s supposedly the case in Kyoto City, Japan. It’s especially perplexing because Japan’s cremation rate is 99%, but that’s a conundrum for another day. Anywho … it’s tradition in Kyoto for loved ones to “remove certain bones of the deceased after cremation” and transport them to a family grave. They leave the “remaining remains” (?) for the funeral home to deposit into a common repository. It was only recently that a “huge golden light bulb turned on” at the city-owned funeral hall and officials came up with the idea to recycle the precious metals left in the 39 tons (!) of cremains generated over just eight months. They’re thinking about using the 119 million yen (~$847k) proceeds for renovations to the funeral home, but citizens are currently debating the ethics of a practice they call “ghoulish” and “creepy.” Where all our recycling friends at? Just sayin’, it might be time for a satellite office in Kyoto.

Kudos to the deathcare workers in Kenya for holding their first-ever mortician conference last week. They organized as the Morticians and Allied Professionals Association of Kenya and vowed to lobby the government for rights and benefits. Among those rights and benefits, though, is their quest to be recognized as members of the medical community. We can see that. However, it seems that specific request is losing something in translation, as one article says deathcare workers want the benefits of “medics” and a YouTube video title says they’re fighting to be recognized as “paramedics.”

Separation of church and … deathcare?

The Church of Sweden wants to open and operate their own funeral homes to combat a decline in church funerals and maybe even make a little money on the side. Some church officials feel that lay funeral homes are steering folks away from traditional church funerals. They’re pitching their idea at the next church meeting, so it will be interesting to see how that goes. What’s more interesting, though, is their belief that opening a funeral home will be “simple.” One official says, “After all, we have lifelong relationships with people where we are with them from the cradle to the grave. So why should we not do it? It is simple. We meet the relatives before, during and after the funeral.” As for pricing, he says, “You only need to put yourself a little below the competition, and you still earn quite a lot of money because we have all the accommodations for free that funeral parlours are looking for.”

60 Comforting Sympathy Messages for Loss of a Child » Urns

60 Comforting Sympathy Messages for Loss of a Child » Urns