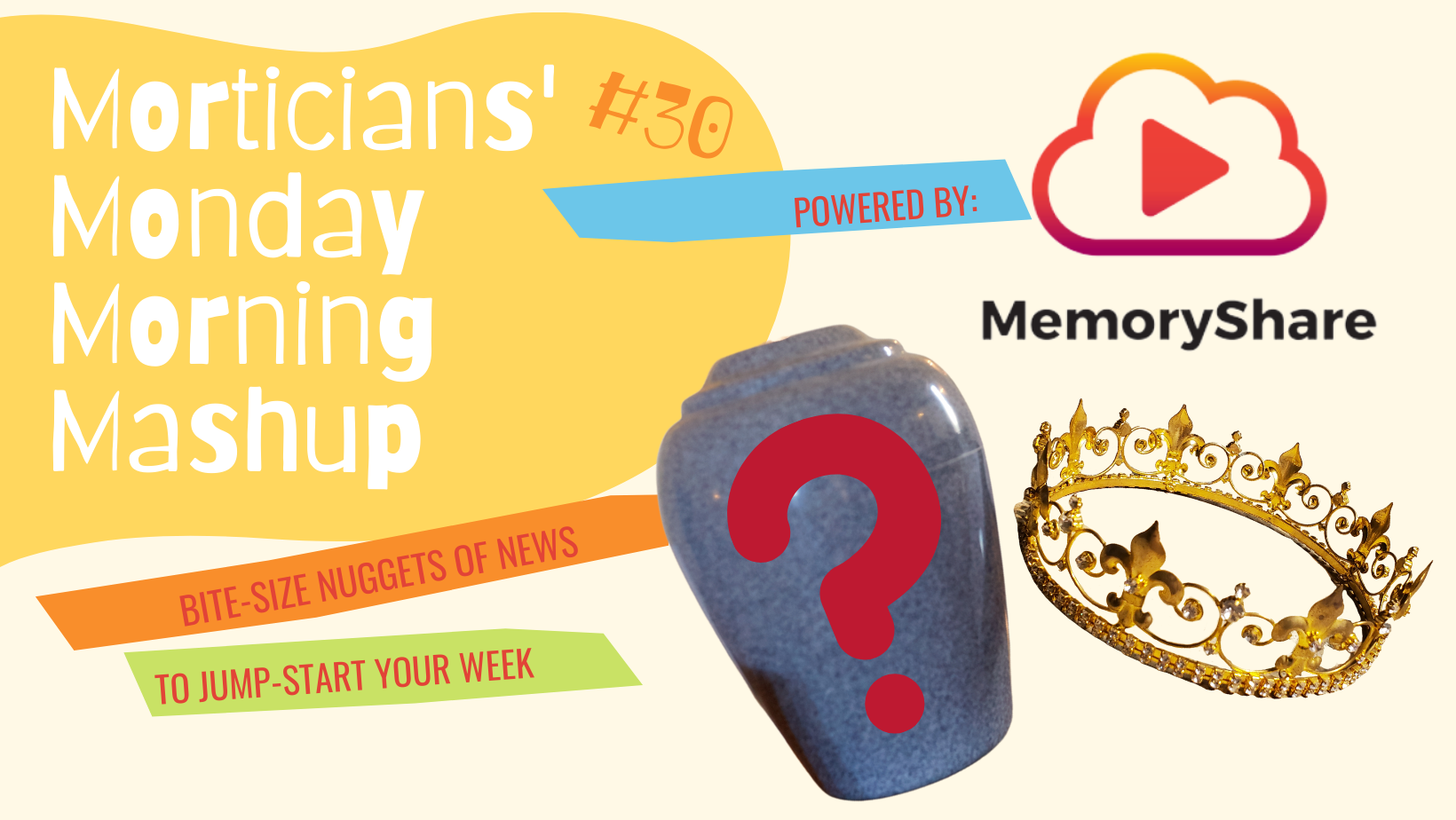 Welcome to the thirtieth edition of Morticians’ Monday Morning Mashup, 4M #30, where we’ll serve up bite-sized, easily-digestible nuggets of the deathcare news you need to crush conversations in the week ahead. Bon appetit!

Green burial? Absolutely. Aquamation? We’re getting there (thank you, Desmond Tutu). Extreme embalming? Not so much. We’ve shared some examples of this a few times in Connecting Directors (here and here); at first, people seemed intrigued. The most recent example of extreme embalming, though, has been nothing less than controversial.

The deceased, 24-year-old Maryland rapper Goonew (a.k.a. Markelle Morrow, a.k.a. The King of Maryland), was murdered in Washington, DC. After his extreme embalming, the funeral home (which is curiously unmentioned in most accounts except to say the crown on his head was their idea) posed Goonew in a standing position for his homegoing service/dance party — in a nightclub. The nightclub has since apologized for their participation in the event, which one report rated as “high on the WTF meter.” The family, though, defended their decision, saying it’s what Goonew would have wanted.

Should we just put him into the lost-and-found box?

Last week some Oregon cemetery workers found a handmade casket on their grounds. It was a casket in a cemetery; what’s so weird about that? Maybe the fact that there was no service scheduled for that day, no grave had been dug, and no one knew the identity of the deceased in the wooden box. Authorities have asked the public for assistance in identifying the man. In response, a man living close to the cemetery volunteered a strange anecdote; supposedly another man committed suicide in the same area of the cemetery about a decade earlier. Coincidence? We’ll just have to wait and see.

It’s time to stop playing “Whose. Ashes. Are They?”

Go ahead and read that subtitle in your best game show emcee/audience voice, because what’s (allegedly) happened (and has happened a lot recently) in deathcare is making the news yet again, and it’s just as ridiculous as it sounds. Recently, a funeral home employee presented a Virginia family with an urn full of cremains they said belonged to 73-year-old Gangadar Sohan — a signed certification of such affirmed the claim. Unfortunately, another funeral home employee had visited the family only the day before to disclose that Sohan had not yet been cremated. This conversation was recorded by the family’s doorbell camera.

Of course, the family went to the funeral home and questioned (while at the same time also secretly recording) an employee — who denied the accusation. Then, somehow, the family found within the facility the cardboard box that still contained Sohan’s body and — you guessed it — recorded their evidence. Only then did the funeral home owner admit the error and promise to cremate Sohan immediately. The family declined and Sohan was transferred to another funeral home. And they’re still not sure who was in the urn.

How’s this for a reason to start a diet?

We all know that carrying around extra pounds can be dangerous to our health — but do you ever think about the damage those Twinkies and Cheetos you’re downing by the box or bag may do to others? I’m talking about the funeral directors who’ll have to haul you around when you die. It seems that workers’ compensation claims filed by UK morticians are on the rise, thanks to the obese deceased and their plus-size caskets. Over the past two years, a UK health organizationhas received 174 reports of serious work-related injuries like broken toes from dropping a heavier-than-usual casket, severe back strain from struggling to lower a coffin into a grave, and — gulp! — stitches after a worker’s hand got trapped under an obese corpse as it was moved into a coffin. Deathcare is more dangerous than people understand!