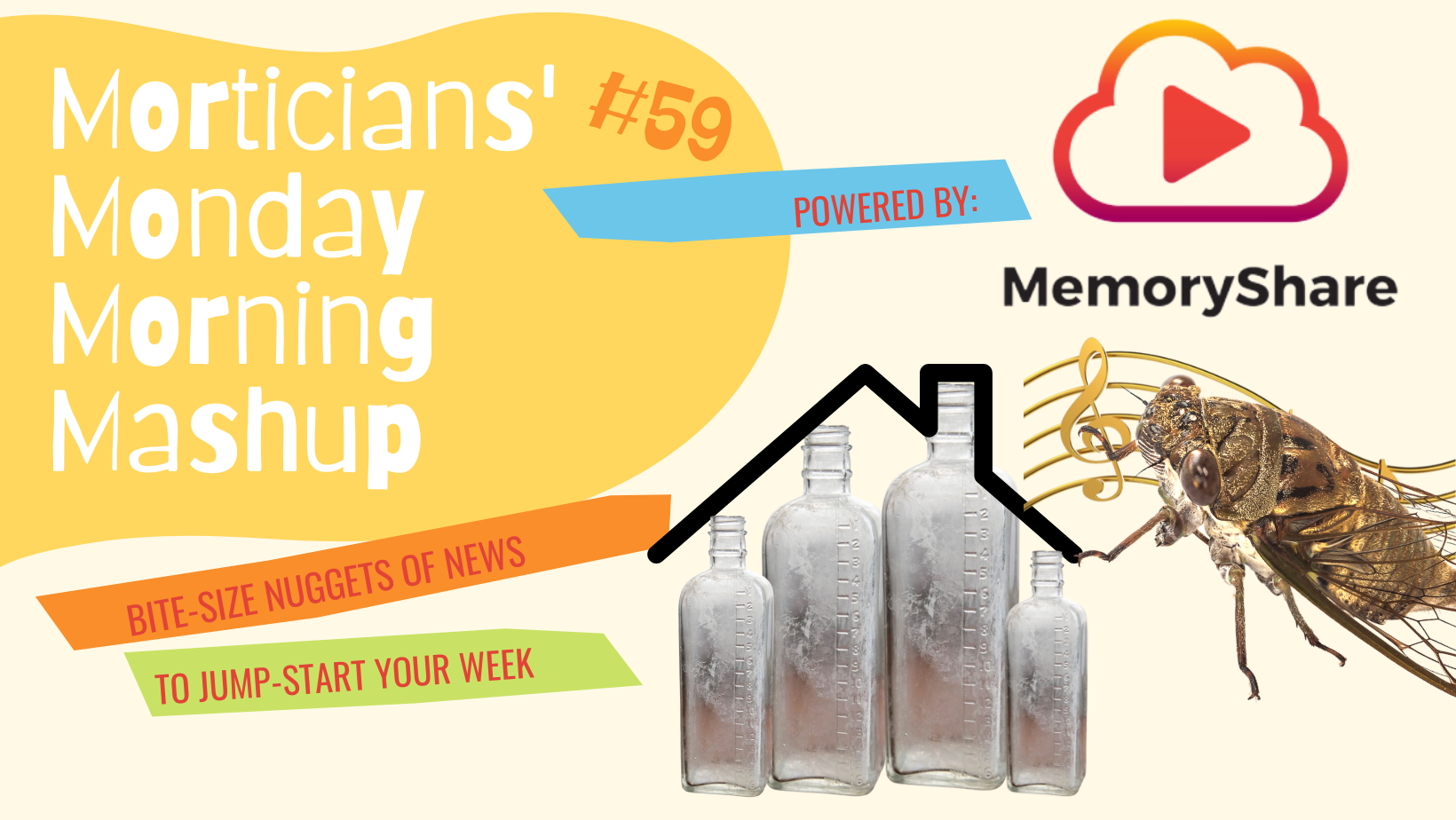 Welcome to the fifty-ninth edition of Morticians’ Monday Morning Mashup, 4M #59, where we’ll serve up bite-sized, easily-digestible nuggets of the deathcare news you need to crush conversations in the week ahead. Bon appetit!

ICYMI, Taylor Swift’s newest album Midnights just dropped, as did the video for “Anti-Hero,” the first from the new collection. Of course, eagle-eyed Swifties notice even the most minute detail in every second of Taylor’s content — including the casket in “Anti-Hero.” As it turns out, this wasn’t a case of clever planned product placement. Although they had sold an Orion model for an “unidentified music video” in July, it wasn’t until a Titan employee saw the video and recognized the design that Titan figured out it was theirs. Titan took advantage of the fame, though, offering a $50.13 “Swiftie discount” and fielding calls from funeral directors looking to do business with a Taylor-friendly supplier.

You’d expect that Salem, Massachusetts might be one of the most haunted cities in America (you know, because of the witch trials and all that …). They surely have their share of spooky cemeteries, churchs, homes, and liquor stores. Wait — liquor stores? Yep. Apparently Bunghole Liquors (a nod to Beavis and Butthead, perhaps?) is haunted because it is the former location of a funeral home. Of course. Legend has it that the funeral home also served as a speakeasy during Prohibition. When the owner went legit as a liquor store, he allegedly buried his embalming tools in the walls of the basement — which, not surprisingly, is now the most haunted room in the building.

Did you know … Apparently, caskets became a thing because coffins were just too “vulgar.” According to this article, the six-sided coffin, which basically outlined the human form being wide at the shoulders and tapering down to the feet, made funeral-goers uncomfortable. The four-sided casket was more decorative, less realistic, and thus, more marketable. But when caskets were first introduced, some felt they were pretentious. Nathaniel Hawthorne, for example, “in 1863, called [the] casket ‘a vile modern phrase, which compels a person… to shrink… from the idea of being buried’.” Touché, Mr. Hawthorne. Touché.

Here’s an item for your travel bucket list. If you ever make it up to West Kootenays in British Columbia, you simply must stop by the “Glass House” on Kootenay Lake. Built in the 1950s by a retired funeral director, the 1,200-square-foot, three-room home sits on a foundation of solid rock, and is constructed entirely of embalming fluid bottles. To amass the more than 500,000 bottles necessary to make his dream a reality, owner David H. Brown traveled across western Canada, eventually collecting 250 tons of the square-shaped bottles.

Song of the Cicada

A Galveston funeral director is the subject of a moving documentary that’s featured at two Texas film festivals this month — and it all started with a chance meeting at a Halloween party more than a decade ago. The night documentary co-director Robert Weiss met mortician Dale Carter, Carter invited him to his “embalming studio” to watch the process. Weiss and his cousin, co-director Aaron Weiss, decided to film Carter over the course of the next several years, including during the challenging pandemic era. The result is the film “Song of the Cicada,” a title Carter coined as an ode to the cicada’s habit of burying itself and re-emerging, resurrected.

The country of Singapore (population 5.5 million) is expecting its annual death count to double over the next 18 years due to its aging population. To prepare, deathcare companies are trying all sorts of new tactics to fill more than 800 open and future positions. Some have “relaxed their criteria for potential employees and are more open to taking in those exploring a mid-career change.” Others are offering annual well-care medical check-ups for “peace of mind” and fewer “stand-by shifts.” They’re also open to hiring foreigners, and are appealing to authorities to loosen foreign-hire quotas for skilled workers. The best perk of all, though, is also the most confusing, logistically, at least: More “work from home arrangements.” We’ll keep an eye on that one for you.

2022 NFDA International Convention & Expo: Attendees Had a Ball in Baltimore

What Happens When You Die? 10 Things to Know » Urns

What Happens When You Die? 10 Things to Know » Urns

Discover the Real Eco-Impact of Disposition with Cremation Rocks!