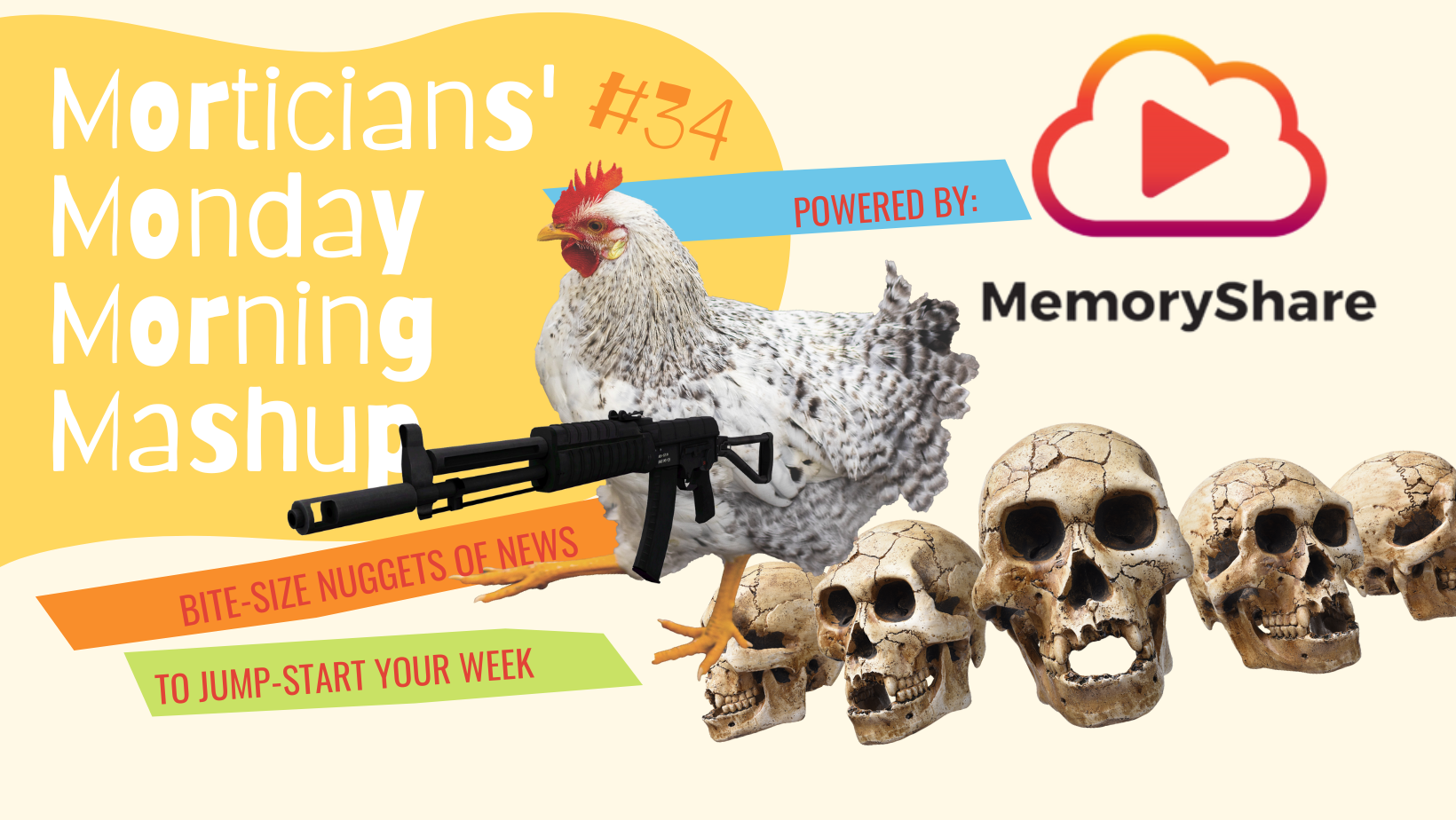 Welcome to the thirty-fourth edition of Morticians’ Monday Morning Mashup, 4M #34, where we’ll serve up bite-sized, easily-digestible nuggets of the deathcare news you need to crush conversations in the week ahead. Bon appetit!

An Ohio funeral director was recently charged with OVI: Operating a Vehicle Impaired. For some reason, he decided that it would be a great idea to drive to the municipal court building (in the funeral home’s truck) and stuff an envelope into the night dropbox. No, he wasn’t paying his fine. Instead, the envelope contained $500 cash and a letter addressed to “Your Honor” — a letter which apparently alluded to the cash as a bribe. Video surveillance led investigators to the funeral home where they found the truck and a copy of the letter on a computer. Now, the director has been charged with attempted bribery in addition to the original OVI charge. SMH.

When Mexican authorities came across 150 skulls strewn across the floor of a dark cave in 2012, they assumed they’d come across a crime scene. After all, the police were sadly accustomed to finding victims of gang violence near the Guatemalan border. As the New York Times reported last week, these guys had the right idea. It was indeed a crime scene — but one that was about 1,000 years old. Ten years after the discovery, archaeologists have determined that the battered skulls were the remnants of sacrificial killings that took place between 900 and 1200 A.D. Anthropologists are now working to patch together the story behind these remains, but they have revealed that most of the bones were from females, and they were all missing teeth.

An Italian lion and Mussolini’s hen

In 1922 a pet hen belonging to the children of Fascist dictator Benito Mussolini died. “Il Duce” asked (or demanded — he was a dictator, after all) that a local farmer who owned land to bury the hen so his children could “leave flowers and remember the [very few] days they spent together.” That hen was the first burial in what is now Italy’s oldest pet cemetery, which is the final resting place for nearly 1,000 animals, including a lion and the deceased pets of prominent politicians and celebrities like Brigitte Bardot. The current owner, who is the son of the farmer who buried Mussolini’s hen, is the only person in Italy who holds a license to bury animals, and he plans to pass the cemetery, named Casa Rosa, to his own children.

Scandal in Shanghai — and Peru, too

We’re not sure if this is a true story, so we’ll let you judge . . . because video doesn’t ever lie, and if it’s on the internet, it has to be true. Anyhoo, a source has reported that a 36-year-old Peruvian woman “stunned onlookers at her funeral reception when she banged on the lid of her own casket.” The story says the family opened the casket and found Rosa Callaca “fully coherent” with wide-open eyes. They rushed the casket to a hospital — where Rosa “was pronounced dead again” just hours later. We’ll let you judge for yourself on the veracity of the story (here’s the video). Oddly enough, a similar story surfaced in Shanghai last week. An elderly man, presumed deceased, was placed in a body bag to be transferred to a crematory. Thankfully, funeral workers saw the bag moving and found the man alive. Of course, there’s video of this, as well.

No words. Even for us.

Months into a senseless war, the atrocities taking place in Ukraine are still escalating. There seem to be no limits to the lengths to which the Russian army will go, and no person, place, or thing that is safe. On April 22, satellite imagery revealed what Ukrainians believe to be a mass grave near Mariupol that could hold as many as 9,000 bodies. Last week, one of Ukraine’s chief rabbi reported that a Jewish cemetery outside of Kyiv had been attacked by Russian missiles, some of which remained unexploded on top of the tombstones they had crushed. Then another story surfaced about a Dutch World War II veterans cemetery that was vandalized by individuals who defaced gravestones with anti-Russian epithets and swastikas, and left Ukrainian flags planted in the sacred ground. Our prayers are with the people of Ukraine and all victims, both direct and indirect — of Russia’s violence.

Here Are the Different Types of Cremation Urns » Urns

Here Are the Different Types of Cremation Urns » Urns

We are Recruiting! - Caledonia Cremation