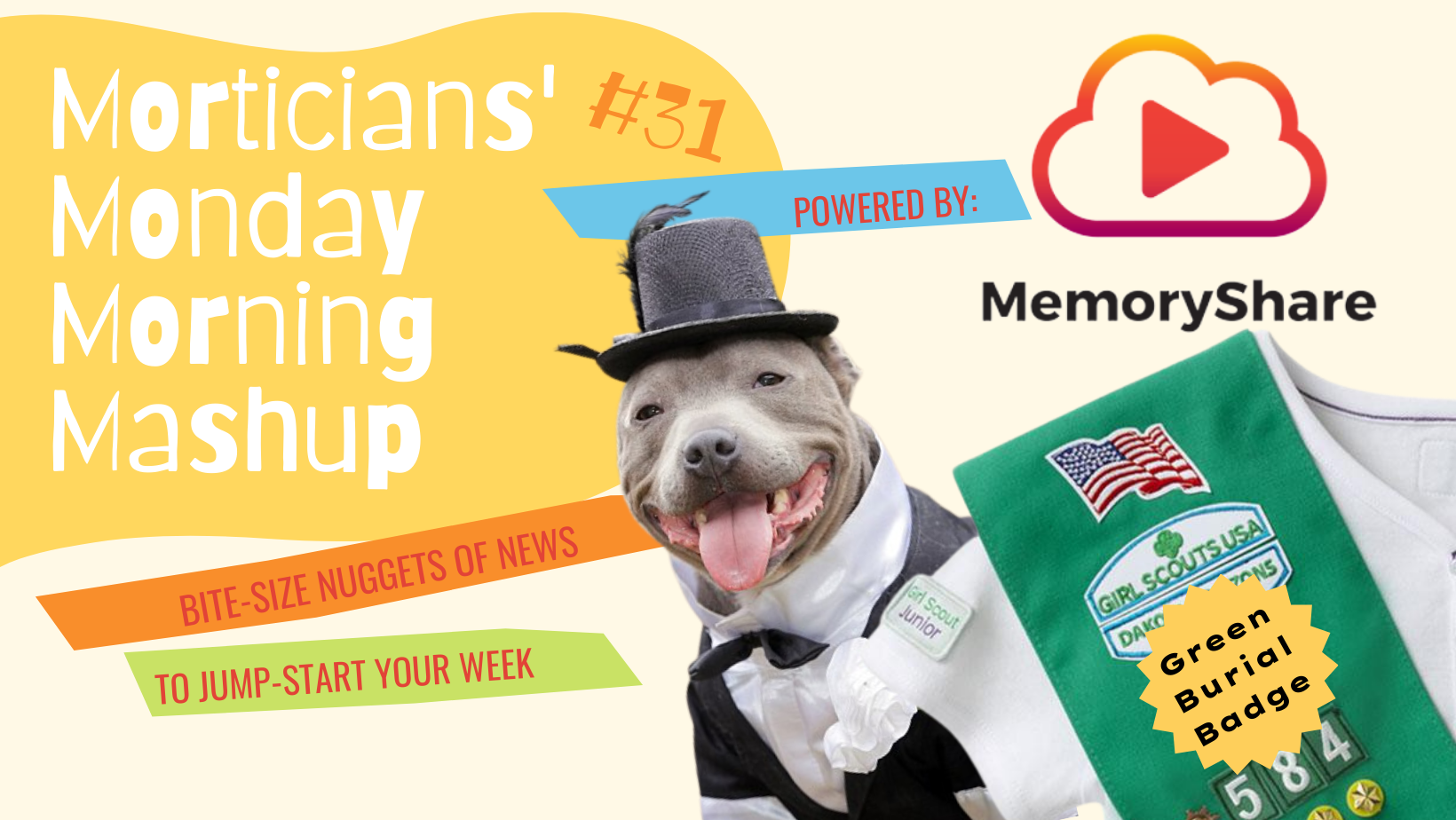 Welcome to the thirty-first edition of Morticians’ Monday Morning Mashup | 4M #31, where we’ll serve up bite-sized, easily-digestible nuggets of the deathcare news you need to crush conversations in the week ahead. Bon appetit!

Here in the States, deathcare professionals have become somewhat accustomed to odd requests and increasing demands from families. Not so in Ireland. A recent piece in the Irish Mirror offered examples of “crazy” trends and “increasingly complex service demands” in deathcare, which they describe as “completely changed”:

BTW, that last one is meant on the part of the mourners, not the funeral directors (but it could go either way). What do you think, though? Are these Irish directors overreacting just a bit? After all, outrageous florals, public speaking, and arranging catering have become just part of the job for American directors, right?

Those are NOT traffic cones

Last week, a 53-year-old Massachusetts woman with a learners’ permit decided to practice her driving skills. She hopped in her Range Rover and headed out — but not to an empty parking lot or proper driving course. Oh no. She went to a local cemetery — where she proceeded to plow over eight gravestones.

A New Hampshire high school senior’s class project on sustainability could have a major impact on deathcare in the state. How, you might ask? Well, this senior, Anya Nicoll, is also a Girl Scout who’s working on her Gold Award — an honor given to scouts who propose a sound solution to a community problem or challenge. In this case, Nicoll learned about the environmental concerns surrounding embalming during her sustainability project, and decided to make promoting green burial the goal of her Gold Award project. Her first step? Asking her State Representative to file a bill to repeal New Hampshire’s one state law that requires embalming for bodies that “shall be exposed to the public for a period in excess of 24 hours.”

Yep, that’s the title of a play set to stream on the Lemonade TV app this weekend. The play is a “romantic comedy set in a crematory in Los Angeles” and is based on “the writer and director’s experience working at a crematory.” It will be followed by a Q&A session. Don’t miss it!

Wait … Is this a compliment or a diss?

Most people probably agree that Princess Diana’s sons Harry and William are decent-looking chaps. But at a recent appearance together, a body language expert described the princely duo as looking like “haunted funeral directors.” So let’s deconstruct this. Does this imply that Harry and William looked like deathcare professionals who are hearing rattling chains in the embalming room or find ectoplasm dripping off their casket samples? Nope. Worse. The expert goes on to explain, “William often adopts the pose and expressions of sadness you might expect of a funeral director” and Harry shows “signals of agitation and anxiety.” Agitation? Sadness? Empathy, perhaps. Compassion, of course. Obviously this person has never seen you guys let loose the night before an NFDA Convention!

The Easter Bunny is a Funeral Director? | FFFW #82

ICCFA Elects New Board Members During the 2022 Annual Convention & Exposition

ICCFA Elects New Board Members During the 2022 Annual Convention & Exposition

ICCFA Debuts New and Improved Website Through Partnership with webCemeteries